This article was written for one of our sister sites, 924S944.com, which deals with the care, rescue and restoration of Porsche 924S and 944 cars.  This article was republished here to help our readers avoid rear-end crashes – regardless of what they drive. -Ed

Here at 924S944.com, we browse the salvage sites like Copart looking for parts cars and even the occasional “mechanical” that can be brought back to life for our Porsche projects.  Over the past few years, one fact has surfaced that is troubling – if a car gets rear-ended, the car will probably be totaled by the insurance company.  Even if the damage is relatively minor, the cost of repair outpaces the value and the car is sent to the crusher.  The good news is that we are provided with a treasure trove of good used parts.  If the crash happens to your own car, though, the news is bad.

A friend in the Orlando area had a Porsche 944S with a sick engine, so he spent a ton of money having the engine replaced with a rebuilt 3.0L Porsche 944S2 engine, and threw in a full leather interior and other goodies.  A couple of months after the job was completed and the bills were paid, the poor thing was rear-ended.  The crash was not bad enough to break the glass hatch, though.  Even so, the insurance company totaled the car.  We bought it, grafted the rear light-and-bumper section from another car, and retitled it as “rebuilt.”  Its new owner is thrilled – it’s a great car, but it has a stain on its title and Carfax.

Copart is filled with examples of this car.  So if you get hit in the rear, there is a pretty good chance that the insurance company will write it off and you will lose your car.

The trick, then, is to avoid getting hit altogether. 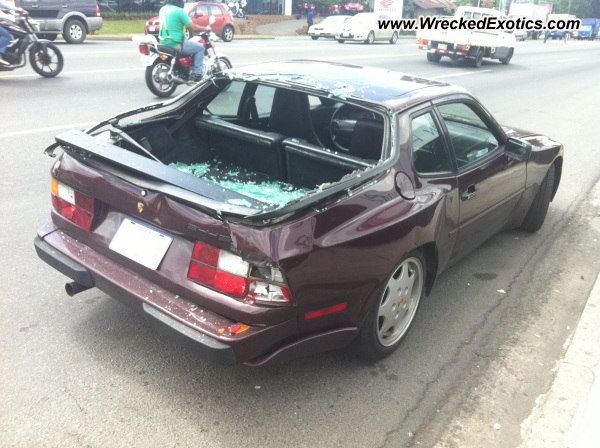 It doesn’t take much of a rear-end crash to total your car and/or create injuries inside your car.  While these tips are not guaranteed to keep you safe, they will help.  Happy motoring!

About the Author: Kevin Duffy is the principal of 924S944.com LLC and a lifelong Porsche 924, 924S and 944 devotee.  During his pre-retirement days, he was a police officer, investigator, trainer and criminal justice educator for forty-five years.  During this time, he investigated untold numbers of car crashes including fatalities involving cars, trucks, motorcycles and pedestrians.  He was also a prolific enforcer of the more serious traffic violations, including drunk and drugged driving.  While each crash is different, the most dangerous driver on the road today is the distracted driver, allowing the car to drive without guidance while the “driver” is occupied with other things.

There was a story today about a Tesla in Connecticut who hit a police car stopped behind a disabled vehicle with emergency lights on.  The Tesla’s driver admitted that the car was on AutoPilot and he was turned around checking on his dog in the back seat.  No one was injured.