If you are like most Americans “over a certain age” you  have probably noticed many necessary prescription drugs are not cheap. Some have become very much more expensive lately.  What is going on? Why is this happening?

The costs of some drugs have skyrocketed as much as 500%. Some new “miracle drugs” can be tens of thousands of dollars per dose. Per capita drug spending in the US is significantly higher than in all other countries. It has become an emotional topic that has made its way to the US Senate.

Here are a few facts:

–  Drug manufacturers can charge whatever they believe the market will bear in the US – for any drug – even generic ones with no research or development needed.

–  The FDA has no ability to control prices charged for drugs.

– Most other developed countries set limits on how much can be charged by drug companies – which has resulted in the same prescription medication being 35-80% less expensive in other countries.

A particularly interesting statistic is the disproportionate expense of US brand-name (and often patent protected) drugs.  Prices for these drugs have risen much more than the consumer price index in recent years.  Accounting for around only 10% of dispensed prescription in the US, these drugs represent 72% of drug spending.

The drug industry group Pharmaceutical Research and Manufacturers of America often cites the time (‘over 10 years’) and cost (‘average over $2.5 billion’) for research and development as justifications for the high costs of new drugs.  However, there does not appear to be a strong correlation between R&D costs and the market price of the drug.  For instance, the R&D costs for the company that developed the blockbuster Hepatitis C drug, Solvaldi, were $62.4 million (not billions) and they planned to make a reasonable profit by pricing the drug at $36,000 per treatment course.  However, another company bought Solvaldi from the innovator and subsequently marketed it at $84,000 per treatment.  That company then made $11.4 billion off Solvaldi sales in less than a year.  Before and after approval by the FDA, drug companies spend considerable money on clinical studies.   Some of these are well structured, expensive, teaching facility based research that often are used to support the application for drug approval and are published by peer reviewed medical journals.  However, much of the post-approval research money is channeled to prescribers and healthcare facilities to conduct marginal studies that are not designed to stand up to scientific scrutiny.  Drug companies promote these types of studies as there is a correlation between physician-industry ties and greater prescribing costs per patient along with increased prescribing of branded medications. 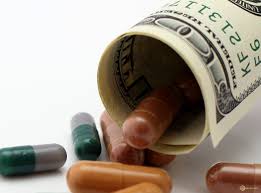 Much higher prices are demanded for drugs under patent protection as no other company can market the same chemical entity until the patent expires.   As drug patents approach expiration, drug companies have become adept at finding ways of extending the profits associated with that drug.   Recently, a large drug manufacturer was forced to pay $96.5 million to settle an antitrust lawsuit because that company had delayed marketing a generic version of a drug in exchange for accepting a large payment from the company whose patent on the drug was expiring.  A company can request a patent extension by having a new or additional indication approved for the drug by the FDA.  Another approach is for the company to develop a new salt form of the active drug or create a sustained release form of the drug.  The company thus obtains patent protection for the new dosage form of the active drug without most of the R&D costs associated with the initial approval process.  In contrast with generics of that drug that can then be marketed by competitors, the new dosage forms are  promoted as enhanced delivery systems for the active drug, often without much proof of improved therapeutic effect but with the costs associated with patent protection.

Because of the large profits associated with patent-covered drugs, those are the only drugs advertised and promoted by drug companies.  Under pressure from drug companies, direct-to-consumer advertising was reluctantly approved in 1997 under the guise of informing and benefiting the public.  Over $5 billion is now spent annually just on TV ads for drugs. Obviously the pharmaceutical industry knows this is a good investment that effectively steers patients to their products and away from less expensive alternatives.  Ads for drugs to treat Hepatitis C encourage viewers to have their blood tested for Hepatitis C and, if positive, request treatment with the advertised drug even if there are no clinical signs of the disease.   Hepatitis C can be a progressive and possibly fatal disease but many patients are likely to expire due to other causes before Hepatitis C ever seriously impacts their life.  Direct-to-consumer drug advertising is permitted only in the US and New Zealand and those two countries also happen to have the highest per capita use of prescription drugs.  To complicate matters further, drug companies are now pushing for the ability to promote their drugs beyond the indications approved by the FDA.  Such advertising and promotion is not well received by major medical organizations.

Providing samples of patent-covered drugs is another aspect of advertising and promotion.  If it is determined that a patient’s condition may respond to a drug that the prescriber has samples of, the samples may be given to the patient by the provider.    Many patients and prescribers may have been steered toward thinking about the new drug by the advertising the company provided.  Accordingly, the samples reinforce the advertising and the perspective of appropriateness of that therapy.  Often, another drug would work as well as the sample drug in treating the condition but by using the sample the prescriber is getting therapy to the patient during the office visit and the patient is pleased because the sample is ‘free’.   When the patient later notifies the prescriber that the sample drug worked, the prescriber must then decide whether to prescribe a supply of that drug or generate a prescription for a different but equally effective drug that is likely to cost the patient and/or insurance company far less than the drug provided as a sample.  If the prescriber continues the drug taken as the sample, the objective of the company has been achieved and any costs associated the sample supply is recouped several times over when the prescription is filled.  There is a correlation between giving free samples and alteration of prescribing habits away from less expensive generic to brand name, patent-protected drugs.

Often touted as the balance to new , expensive brand name drugs, generic drugs have not proved to be a uniformly good answer.  Indeed, there are many generic drugs that are as effective and safe as agents under patent in the same therapeutic class.  However, increasing consolidation among generic manufacturers and buy-outs by large brand name drug companies have resulted in very limited competition on some generic markets and markedly higher prices for some generics.  For instance, generic  topical steroids which used to be inexpensive have seen significant price increases in the last couple of years.  Often it seems that only a couple of companies are marketing a specific generic drug at a given time so there is limited competition.  Epipen which has been on the market for many years saw a price increase of over 500% to $600+ since it was purchased by a large drug company.  Even though the active drug of Epipen (epinephrine) has been available as an inexpensive injectable generic for many years, the ease of use of the Epipen resulted in the product being highly desired by patients prone to experience a serious allergic reaction.  This meant that the company owning Epipen basically had a sole-source product even though it was no longer covered by patent protection.  In turn, the drug company steadily increased the price of the drug until it became totally indefensible. When the public backlash to price-gouging on this cheap-to-make and potentially life-saving drug reached the point that it could no longer be ignored, the company agreed to make a less expensive version of the Epipen for $300.  Another manufacturer has since marketed a similar auto-injector for epinephrine for much more reasonable price of around $100.  Coincidentally, the manufacturer of Epipen is the same company that paid $96.5 million to settle the antitrust lawsuit mentioned earlier.  Obtaining approval of generic drugs is not nearly as expensive or complex as getting approval for a new drug and the FDA is looking at ways of expediting generic approvals.  Hopefully, this will result in increased competition and better pricing of generic drugs for consumers.

The high prices we pay for drugs in particular and healthcare in general may be more easily tolerated if a significant improvement in outcomes could be demonstrated.  Aside from some therapies that offer the promise of noteworthy advancements in oncology care, there does not appear to be many new therapies that demonstrate good healthcare value to cost ratios. Indeed, statistics show that clinical outcomes for many diseases and overall mortality are significantly better in other developed countries than in the US.  In those countries, healthcare is viewed more as a right rather than a privilege for the fortunate.

This article is also in Center for Healthcare Innovations at chinnovate.org