OK, let’s assume that you don’t know where there are any major bicycle road races (there are several in Europe and the US) and could care less if it is an Olympic event. Let’s also assume that you believe a bicycle is suitable only for getting someone who doesn’t have a car from point A to point B very slowly.  And let’s also assume that you think television coverage of a bike road race has to be boring as watching paint dry and that there’s no way of understanding the classifications/standings of a major bike race.  If any of these assumptions apply to you then you need to watch NBC Sports Network during TDF (Tour de France)—if not this year, than mark it down for next year. 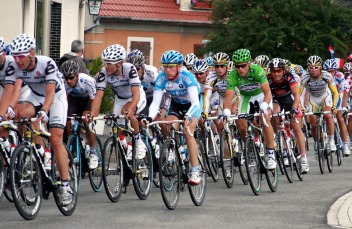 There are many reasons to do this but we’ll focus on only 3.  First, the visual coverage of the race is incredible.  From the GoPro cameras strapped to some riders capturing the twisting curves from ground level to the staggeringly beautiful helicopter footage of the surrounding countryside there is always something stunning to be seen.  Along the stages of TDF there scenes ranging from deep river gorges to medieval towns with cobblestone streets to Alpine glaciers to the glorious island monastery of Mont St. Michael to the grandeur of Paris, Amsterdam or Bern.  Second is the lively, knowledgeable and entertaining commentary provided by the old pros Phil Liggett (has provided coverage for 43 TDFs) and Paul Sherwin (former professional cyclist and TDF participant).  Their enthusiastic informative approach makes watching the race a true pleasure. Occasionally, an interesting English phrase will slip into the discussion such as describing a rider who is not keeping up as ‘having a spot of bother’ and referring to a traffic circle as ‘traffic furniture’.  In addition to explanations of team racing tactics and psychology, there are also interviews with some of the top cyclists, team owners and officials from TDF. 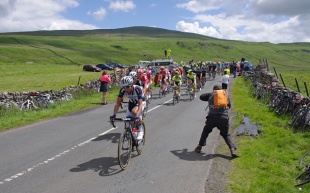 As compelling as the visual and commentary components are, the 3rd and major reason for watching TDF is of course the bike race itself.  The 2016 Tour is actually 21 separate races (71 to 130 miles each stage except for 2 shorter, intense time trials) for a total 2193 miles.  Riders from 35 countries make up the 22 teams with 9 riders per team.  Usually most of us think of maybe 10 to 15 MPH when riding a bike.  In TDF, the average for each approximate 4 hour ride is 30-35 miles per hour with some speeds approaching 60 on the winding downhills.  And when you consider that the route exceeds a mile in altitude at some points with gradients going up to 16%, it’s amazing that such average speeds can be obtained (I’ve had a car that probably could not have made it up a 16% slope).   It is even more amazing that after these daunting challenges and flat-out efforts, there have been 3 photo-finishes in this TDF where an inch or two separated the winner and ‘first loser’.

This year marks the 103rd Le Tour de France.  Over the first 2 weeks it has been an amazing event showcasing superb athletes who accomplish things that the rest of us bike riders can dream about and enjoy vicariously.  If you get to see any part of this TDF, the odds are pretty good you’ll be looking forward to the next one in July, 2017. 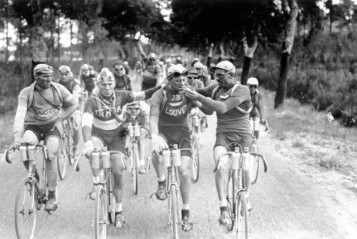 HouseSpouseLife.com (and InspiringLifeOver50.com) provides inspiration and insight for those over 50 who continue to change the world – and for those who love them.