On Monday, May 23, at about 6:30 pm, there was a deadly crash in Daytona Beach.  The bottom line is that two cars and two pedestrians were involved with one death – a 21-month-old child in a stroller.  The crash was caused by an 85-year-old man who was suffering from Alzheimer’s Disease, reported as missing by family members earlier in the day.  (See news coverage here)

It is not difficult to decide whether a parent or relative should not be driving.  It is much more difficult to take the steps needed to keep him or her off the street behind the wheel.  We at HouseSpouseLife.com are republishing this article from two months ago in hopes of reaching more people who can and will take the steps necessary to prevent this type of tragedy.

Dad just can’t drive any more, and I don’t know what to do…

As we get older, our parents and grandparents also get older. For some, eyesight and hearing begins to fail, the ability to move around is impaired and some develop a level of dementia that, when taken together, can restrict a person’s ability to do everyday things. One of those everyday things is driving a car.

Many of our elders have been driving since their teen years, enjoying the freedom to get around and do what they please. Since retirement, they have even further freedom to move around the community in their car. However, physical and mental impairments can

make them into somewhat scary drivers, and in some cases down right dangerous to themselves and others. We see the headlines and we get worried that Mom or Dad will be the next one. “Elderly Driver Crashes Car into Front of Convenience Store.” “Elderly Driver Kills Three After Church in Car Accident,” and “Elderly Man Dies After Crashing Car into Pool” are headlines from the past year or so.

We worry, but what can we do about it? Each state is different, so state law and licensing procedures will differ greatly depending on where the older driver lives and is licensed. Most states have instituted laws that require some sort of accelerated renewal periods starting at a specific age; some require vision and/or hearing tests past a certain age.

Nine states allow some level of

reporting to the state licensing authority to request retesting based on physical or mental deficiencies. These states are Florida, Michigan, Mississippi, Missouri, New Jersey, North Carolina, Oklahoma, South Dakota and Utah. Some of these states have “confidential” reporting systems, meaning that the driver to be retested cannot find out who completed the report. In those states that do not have some level of confidentiality, family members may be hesitant to report elderly relatives, so they call for police officers to submit the report for them. The report goes to the state, and the individual is contacted to make an appointment for retesting. He or she is evaluated based on the information filed, and a decision is made whether or not to reissue a driver’s license. Some states may grant a license with restrictions such as time of day (no night driving), extra equipment such as right side mirror, or others.

The American Automobile Association (AAA) has an entire section of their website dedicated to Senior Driving (http://SeniorDriving.AAA.com). One page contains tips on initiating conversations with the older driver about being safe on the road   (http://seniordriving.aaa.com/resources-family-friends/conversations-about-driving).

Having that conversation first is important, but it is neither easy nor simple. Seniors do not want to give up the freedom that the car provides, and in many communities, the lack of public transportation can leave the car-less senior with no means to shop or even socialize.

Even when seniors no longer have a license, the urge to drive can take over – license or not. Keeping mom or dad from driving can involve elaborate schemes of hiding keys, disabling or even selling cars, moving the car to an undisclosed location, and involving friends and family in a “no drive” pact. But our elders are resourceful, and can sometimes think their way around these restrictions. One elderly man with some dementia retained his car, but the kids hid the keys so that he could not find them. When the home health aide arrived to take him to his doctor’s appointment, he insisted that they take his car – she would drive, of course. The aide spoke with his son who gave in “if that would make him happy.” He told her where to find the keys, and dad watched from the hallway…and now knew where to find them. The next day, he went missing and was found by police over two hundred miles away, telling police that he was going to the grocery store.

Statistics give us mixed messages when it comes to elderly drivers. They are not the most deadly, and they are not the age group involved in the most crashes, so legislation to retest more frequently, require on-road testing after a certain age or otherwise accelerate the screening after a certain age are met with resistance from elderly advocacy groups as discriminatory. However, family and friends know when a certain individual is experiencing the kinds of problems that make them dangerous behind the wheel. With that revelation comes responsibility.

The question to ask is simple. What if I do nothing, and something bad happens? 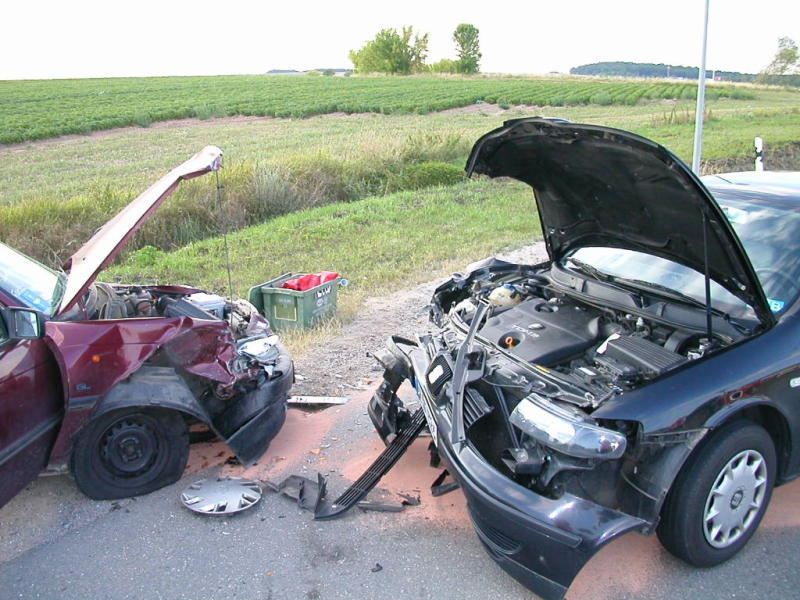 HouseSpouseLife.com provides inspiration and insight for those over 50 who continue to change the world – and for those who love them. Find innovative articles about travel, food & wine, and enjoying life. Discover resources in healthcare, lifelong learning, and videos. Complete a Personal Medical Form, learn a foreign language, submit written imagery, and prepare for the best time of your life! Do you have something to say that is inspiring, informative, and entertaining?  Ask about a guest blog opportunity! krduffy@housespouselife.com