During the final moments before a major overhaul commences of Disney’s Hollywood Studios in Orlando to make room for an invasion of Star Wars and Toy Story activities, several of us took a final farewell tour through some soon to be gone areas of joy and delight.  And we got a glimpse of what is coming soon!

Although details from Disney are “less than detailed” it is anticipated that the Lights, Motors, Action! Stunt Show, the Streets of America, Honey, I Shrunk the Kids, and Earful Tower (a water tower with mouse ears) will be demolished in early April 2016 to make room for a Star Wars themed area and Toy Story Land. Completed construction the new attractions is expected to take a few years.

The Wookie wins after all! 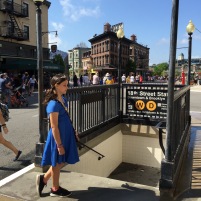 The area to be demolished and converted to feature expanded Star Wars and Toy Story attractions is a “left over” from when the park was built as “Disney-MGM Studios.” With Disney’s acquisition and reboot of the Star Wars franchise, it is no surprise that Disney would want to capitalize on it’s continuing success.  The current Toy Story attractions are some of the most popular at Hollywood Studios, so expanding it makes good business sense.

Disney is planning on a new Star Wars movie every twelve to eighteen months, so Disney want to keep up the excitement for the characters and stories from “a long, long time ago in a galaxy far, far away.”  The Star Wars Launch Bay offers a look at the original movies all the way through to the most recent installment released last December.

Always the Master of Media, Disney will leak information about this transformation as work progresses.  If planning a trip to Walt Disney World in Orlando, make sure you check on information for Disney’s Hollywood Studios in making decisions on visiting the park – while construction is under way, various attractions will be closed.

May the Force be with you!

House Spouse Life in Florida has had Annual Passes to Walt Disney World for several years, and has been regular visitors to Orlando Disney attractions since it opened in 1971.  Watch HouseSpouseLife.com for more updates and information on Orlando attractions, and if you have a question, let us know!  We welcome comments and questions below!