There was a Porsche ad in the magazines a few years ago that still gives me a chuckle.  It depicts a speed-blurry Porsche 911 from the back with the caption “Kills Bugs Fast.”  And so it does.

But what happens when your car – Porsche or not – kills bugs fast?  Those bugs get on your paint, glass, chrome, rubber, and whatever else faces the front of the car, depositing their dead, rotting carcasses and releasing all kinds of hellish chemicals.  They dry out and make themselves difficult to remove without causing some sort of damage. 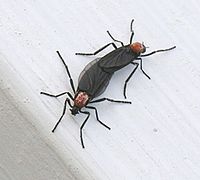 While every part of the country seems to have its own special bugs, here in Florida we have “love bugs.”  According to Google and Wikipedia, the love bug is a species of “March bug” found in Central America and the Southeast United States, particularly along the Gulf Coast.  While the bug is basically neutral pH, when they hit the car and left for a day or so they become acidic, and that is where the damage starts to occur.  They commonly swarm in the Spring and the Fall – May/June and September for us in Florida.

Since they tend to get acidic pretty quickly when deposited on the car, getting them off cleanly is vitally important.  Car washes, mystery sprays and ointments and other magical items do seem to work, but here at 924S944.com we have found a solution that is cheap, easy and effective.

Dryer Sheets and Water.  That is the solution.

The sheets that you put in the dryer to keep your clothes from sticking together from static electricity and give them a nice smell are also bug removers.  While it does not say so on the box, these sheets can take the bugs off paint, rubber, class, plastic and anything else.  Here is what you do.

Wet the car where the bug guts are located, and wet a dryer sheet – (I usually get three or four of them, but I’m not sure that it is really necessary.). Gently wipe and rub the bug remains with the dryer sheet, wetting the area to rinse away the gook.  You will find that the bugs come right off, leaving the surface undisturbed.  On fresh deposits, this work well with just a gentle wipe; when removing bug guts that have dried up, a little more persuasion may be needed.

So that is the trick – water and dryer sheets.  It has worked for me for years.

One other thing to remember, though – if the bugs get on the paint, bumper, windshield and lights, they can also make it into the openings on the front of the car.  That means that bugs will get into the radiator, oil coolers and anything else living in there.  A good rinse with water will help, but if you hit a big swarm, they may reduce the effectiveness of the radiator and coolers.  Rinsing them with a stream from a hose from the back may push them back out the front from between the air passages.  Just something else to worry about.

We know some folks who have thrown a box of dryer sheets into the trunk for “bug emergencies.”  If they hit an unusually large swarm that covers the windshield, they can stop and get a little water and clean the windshield.  Great idea.

This article was originally published by the author on our sister site, 924S944.com, a blog site that is dedicated to Porsche 924, 924S and 944 cars.  It is presented here with permission.