By Susan Jaffe, January 4, 2017, Kaiser Health News  (republished with permission). InspiringLifeOver50.com shares important articles of interest from reputable journalists at times – such as this one.

About 1.4 million residents of nursing homes across the country now can be more involved in their care under the most wide-ranging revision of federal rules for such facilities in 25 years.

The changes reflect a shift toward more “person-centered care,” including requirements for speedy care plans, more flexibility and variety in meals and snacks, greater review of a person’s drug regimen, better security, improved grievance procedures and scrutiny of involuntary discharges.

“With proper implementation and enforcement, this could really transform a resident’s experience of a nursing home,” said Robyn Grant, director of public policy and advocacy for the Consumer Voice, a national group that advocates for residents’ rights.

The federal Medicare and Medicaid programs pay for most of the nation’s nursing home care — roughly $75 billion in 2014 — and in return, facilities must comply with government rules. The new regulations, proposed late last year by Health and Human Services Secretary Sylvia Mathews Burwell, take effect in three phases. The first kicked in in November.

They allow residents and their families “to be much more engaged in the design of their care plan and the design of their discharge plans,” said David Gifford, a senior vice president at the American Health Care Association, which represents nearly 12,000 long-term-care facilities.

Grant goes even farther, saying the new approach puts “the consumer in the driver’s seat.” Until now, she noted, a person’s care has too often been decided only by the nursing home staff. “And if the resident is lucky, he or she is informed about what that care will entail, what will specifically be done and who will do it.”

HHS reviewed nearly 10,000 comments on its draft proposal before finalizing changes. One controversial measure in the department’s final rule would prohibit nursing homes from requiring residents to agree in advance to have any disputes settled through a privately run arbitration process instead of the court system. The industry association objected, claiming that Medicare officials have authority only to regulate matters related to residents’ health and safety and that an individual’s rights to use arbitration cannot be restricted. The ban is on hold until the association’s lawsuit, to force the government to drop the provision, is decided.

Here are highlights of the requirements now in effect:

Making the nursing home feel more like home: The regulations say that residents are entitled to “alternative meals and snacks … at non-traditional times or outside of scheduled meal times.” Residents can also choose their roommates, which may lead to siblings or same-sex couples being together. And a resident also has “a right to receive visitors of his or her choosing at the time of his or her choosing,” as long as it doesn’t impose on another resident’s rights.

Bolstering grievance procedures: Nursing homes must now appoint an official who will handle complaints and follow a strengthened grievance process. Decisions must be in writing.

Challenging discharges: Residents can no longer be discharged while appealing the discharge. They cannot be discharged for non-payment if they have applied for Medicaid or other insurance, are waiting for a payment decision or appeal a claim denial.

If a nursing home refuses to accept a resident who wants to return from a hospital stay, the resident can appeal the decision. Also, residents who enter the hospital have a right to return to their same room, if it is available.

A state’s long-term-care ombudsman must now get copies of any involuntary discharges so the situation can be reviewed as soon as possible. 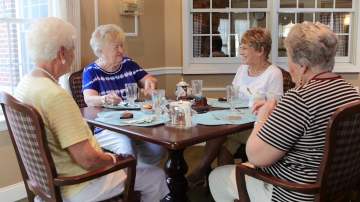 Ensuring a qualified staff: Consumer groups had urged federal officials to set minimum staffing levels for registered nurses and nursing staff, but the industry had opposed any mandates and none was included in the final rule. Instead, facilities must have enough skilled and competent staff to meet residents’ needs. There are also specific training requirements for caring for residents with dementia and for preventing elder abuse.

“Competency and staffing levels are not mutually exclusive,” said Toby Edelman, a senior policy attorney at the Center for Medicare Advocacy. Person-centered care and other improvements “don’t mean anything if you don’t have the staff who know the residents … and can figure out why Mrs. Smith is screaming.”

Yet, requiring a certain number of nurses could backfire, said Gifford. “It could actually result in places that are above those ratios lowering their staffing levels and other places that would increase staffing when they don’t need it and could be putting their resources into better care to meet the needs of the residents.”

Welcome to InspiringLifeOver50.com! We enjoy life with those over 50 who continue to change the world! We are Inspired – not Retired!

You can reach us by email at KRDuffy@me.com.  We are located in Central Florida, DeLand to be exact, halfway between Orlando and Daytona Beach.