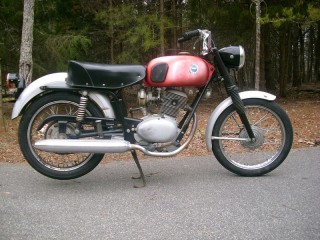 My first stab at adolescent independence involved a 106cc Sears motorcycle when I was fifteen years old.  The bike was “in the crate” from a local Sears and Roebuck, although it had been in the crate for an extra few years.  As a ’67 model, I acquired it when my Dad brought it home for me in 1969 – he bought it for $175.  I never considered a motorcycle for transportation, and he was not a biker.  He just thought that it would be a good way for me to get to school and back.  Basically, I taught myself how to ride.

At school I got a lot of ribbing about my “Sears” but I let it roll off my back.  The other guys rode Yamahas, Hondas and such, and my best friend had a Harley Davidson – 65cc Italian model.  We were quite the pair.

In Florida at the time, a fifteen-year-old could ride a motorcycle, alone, as long as it was less than five horsepower.  My 106 was within the limit, so I could use the bike to go to school, swim practice, and eventually work.  I learned to ride in traffic, on the interstate, in the rain and loaded with stuff.  It was sometimes hard to start, broke down too many times, but it was my key to freedom – one of the principle reasons that we chose to ride.

In the next many years, I went through many different kinds and brands of motorcycle.  Here is an incomplete list of the various bikes that I chose to ride:

You will notice that the last bike on the list is a Kawasaki Police 1000.  I rode them with my job at the local Sheriff’s Office for almost four years, piling up a lot of miles and a lot of stories.  In all, I take pride in that I never went down and never got a scratch – and walked away without a limp.  It was a great job for a bike guy.

After leaving the Sheriff’s Office, I continued a love affair with motorcycles and motorcycling.  Some of the list above came after the S.O., including two different “retired” police Kawasaki KZ1000P’s.  I should mention that even though I broke my knee riding my Yamaha 360 off-road and I tore a pair of pants in an unfortunate rain incident, I never went down on the road in over forty years on two wheels.  I consider myself mildly skilled and hopelessly lucky.

My last bike was a 1996 Kawasaki KZ1000P police bike.  While I enjoyed it immensely, I found myself more than a little fearful while on the road.  After several close calls with distracted drivers, I decided that enough was enough.

What is happening today?

According to the Insurance Institute for Highway Safety, deaths from automobile

Since 2005, smartphone technology has made calling and texting more effective.  In 2007, Americans sent more text messages than made phone calls – significant.  We all know that distractions such as changing the music or looking for something in the car causes crashes – I handled many of them myself as a cop.  As texting and talking on the phone has become easier and more popular, distracted driving has become even more prevalent.  Some experts say that distracted driving is more dangerous on the roads today than drunk driving.

Here is an interesting fact from a National Highway Traffic and Safety Administration study: According to the 2012 National Occupant Protection Use Survey on Driver Electronics Use, at any given daylight moment in 2012, an estimated 660,000 drivers were using hand-held cell phones.  That is scary.

So on my bike, I am sharing the road with distracted drivers.  Then I have to realize that the consequences of a crash on a motorcycle with a distracted minivan or SUV – or anything, for that matter – could be fatal, or at least cause severe injuries.  And the older we get, the harder it is to heal.

So, I gave up motorcycles  – too damn dangerous with the idiots on the road today.  But I like the open air feeling that motorcycles offer.  The next best thing?

Convertible sports cars are a lot of fun.  They offer the open-air fun of a bike with some protective body work around you, along with a roll bar, seat belts and air bags.  You have more storage space that is waterproof and lockable.  And when it rains, gets cold or hot, I can put the top up and work the climate controls.

Okay – I’ve turned into a wimp.  Maybe so, but my 2001 Porsche Boxster is my four-wheel motorcycle.  The top is rarely up – my temperature tolerance is 45 to 98 degrees without worrying about heat or AC.  And I don’t feel bad about not wearing a helmet.

My wife stopped riding motorcycles with me years ago, but we went to dinner tonight in the Boxster with the top down.

I still find myself checking out the motorcycle shops when I ride by.  I have never owned a Harley, and I really like the Road King – yea, the base for the police Harley.  I also like the new Indian and Victory motorcycles.  But…

I am sure that many will disagree with me, saying that I have abandoned them and gone to the dark side.  But remember that my background includes decades of responding to and investigating crashes, including fatal crashes and motorcycle crashes.  I just don’t want to be the “guy in the news.”  I trust myself.  I don’t trust them.  They’re morons, and they might try to kill me.

What do you think?

I want to emphasize here that I am not a”anti-motorcycle.”  In fact, I still love them.  But my fears of being struck by a distracted seventeen-year-old in his dad’s Volvo have outpaced my desire to ride the streets on two wheels.  And where I go for fun, I like to take my wife…and she won’t go on a bike.  So, if you are a rider, remember a few things.  First, ride in groups with headlights on.  Second, watch everything and adapt your driving to the morons out there with you.  Third, wear a good helmet, even if your state doesn’t require it.  And finally, if the weather isn’t cooperating, take the thing with four wheels and windshield wipers.  You don’t get extra credit for riding in the rain.

HouseSpouseLife.com provides inspiration and insight for those over 50 who continue to change the world – and for those who love them. Find innovative articles about travel, food & wine, and enjoying life. Discover resources in healthcare, lifelong learning, and videos. Complete a Personal Medical Form, learn a foreign language, submit written imagery, and prepare for the best time of your life! Do you have something to say that is inspiring, informative, and entertaining?  Ask about a guest blog opportunity! KRDuffy@HouseSpouseLife.com
Kevin, Christal, Jerry & Barbara